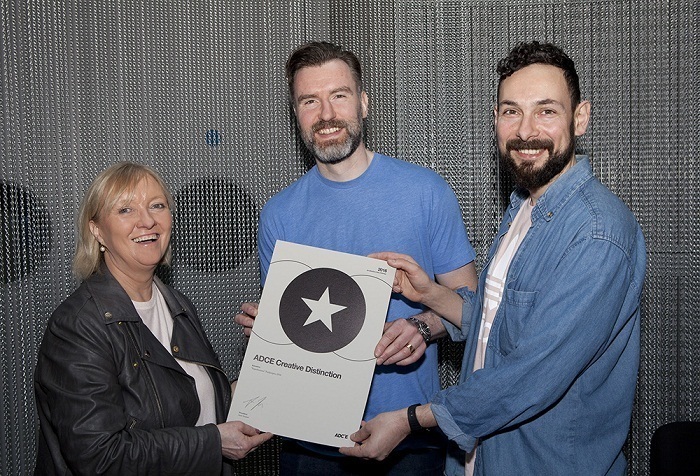 4Creative “We are the Superhumans’ recognised with ADCE Creative Distinction Award

How do you top a D&AD Black Pencil winning campaign that not only put the Paralympics on the same level as the Olympics, but fundamentally shifted perceptions of people with disabilities on a national scale?

Many creative directors could retire happily after such first success, but 4Creative’s follow-up to 2012’s iconic Meet the Superhumans quickly proved to be an even greater force for good than anyone could have ever hoped, making it a fitting and deserved winner of the 2016 ADCE Creative Distinction Award.

The Creative Distinction is a special individual honour, created to recognise the most inspirational examples of creativity, which has had an outstanding societal impact. For We are the Superhumans, outstanding may not even be enough to accurately describe its incredible impact, and the ADCE was on hand this week to present the award to 4Creative’s Chris Bovill and John Allison in person:

“The original Meet the Superhumans was advertising at it’s most powerful and emotive and I would have thought almost impossible to follow,” commented Dara Lynch (ADCE Board Member and D&AD COO). “Yet 4Creative has exceeded all expectations. Where the original was all about strength and determination, and getting the Paralympics on the map, last year we saw the full spectrum of disability happily competing in sport, but more than that, they are flawlessly doing everyday things.

“In some ways this makes it a much more powerful message, celebrating our differences doesn’t just mean the athletic super humans, its all humans overcoming adversity to live normal lives”.

We are the Superhumans

It all began after the conclusion of the London 2012 Olympic and Paralympic games, when the dust had settled and 4Creative’s Meet the Superhumans was picking up plaudits and awards all over the globe. Surely there had to be a follow-up in four years time?

Generally sequels are always considered much tougher, especially without the luxury of the games being in London for the first time in 64 years. Instead, it would be a Rio Paralympics beset by all kinds of negative press and a UK audience with much less reason to tune in.

But rather than simply look to repeat what had gone before, 4Creative’s solution was to turn the original brash, confident tone into a celebratory one. Soundtracked by a cover of Sammy Davis Jr’s “Yes I Can”, the three-minute film brings in people with disabilities from all walks of life.

It not only connected those who often feel excluded from society, it put them on a pedestal. From the iconic, defiant message of arrival in 2012, followed a masterful transition that revealed a bigger class of superhumans that we see around us every day.

“We’ve been watching politicians in the House of Commons cry and received emails from young disabled kids saying how inspiring it is,” said 4Creative’s Chris Bovill and John Allison, reflecting on the campaign. “It has given team GB a boost out in Rio and it’s on the national curriculum.

“It has thrown down the gauntlet for Japan to up their game with the Paralympics and the way disability is viewed. It has proven why Channel 4 is a very special brand. It’s the kind of work that can only be made when a company and its employees are all pointed in the right direction. It also proves that the Great British public demand more diverse on-screen representation.

“So many people throughout Channel 4, Blink productions and all the disability bodies had a role in it. It’s a testament to collaboration, selfless creativity, craft and production, and it shows in the work. So it’s an honour to accept this award on behalf all the incredible people both on-and-off-screen who made it happen.”

Decided upon by the ADCE board, comprised of representatives from each of the 20 member clubs from across Europe, the Creative Distinction exists outside of the traditional ADCE Awards programme. Work from the full calendar year is considered, can come from any discipline, and both commercial and non-commercial work is eligible. The sole criterion is that it must reward a creative idea with significant cultural and societal impact.

For 2015, the inaugural award was given to French illustrator Jean Jullien, whose “Peace for Paris” design became a global symbol for unity, solidarity, and defiance in the wake of the French terror attacks.